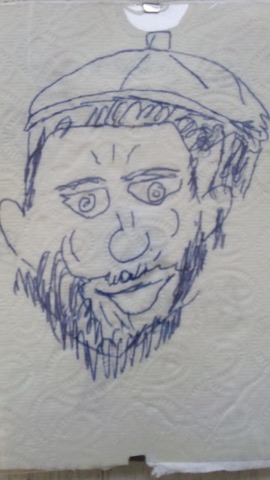 What is your creative passion, Jim?

I am an amateur film maker I suppose you could say, well I’ve written scripts and had films made, and I help out Jack and Mhairi with the Ventnor Fringe.

How did you get into film?

I went to university and did a degree in creative writing which is where I learnt the process of script writing. I wrote a script for a workshop run by my university lecturer John Goodwin, here on the Island. All of our scripts were put into a kind-of contest and whoever had the best script would have it made into a film. John came up to me one day and said- Jim, your script is the best by far, we’re gonna make it into a film – so I was just happy to have that opportunity. We then filmed it nearby in Bonchurch.

How did you get involved with Fringe?

Well I’ve been connected from way back, before it first started 8 years ago. When Jack, Mhairi and Joe were just teenagers. Jack created a board of creatives to help him with theatre and script production. There were a few of us back then, but that was a long time ago now.

So Jack was determined from a young age; how did you meet him?

I used to help out with the local youth club, at the time it was the only thing to keep kids from hanging around the streets. Luckily now there are more opportunities for young people but there’s still some way to go (see the Fringe Forum article for more).

What did you help Jack with in the beginning for Fringe?

We all just helped to facilitate his vision I suppose, he said he wanted to bring art and culture to Ventnor and talking about a fringe festival and we just helped him do that, any way we could.

You’ve stuck with it all these years; how do you think the Fringe has effected Ventnor?

I think it’s been amazing for Ventnor, the amount Ventnor has changed since the beginning of the Fringe is amazing. It’s what Ventnor needed for so long.

Do you think of Ventnor is transforming into a place that people can start building businesses and be successful?

I think it’s come a long way. I think all the Ventnor Exchange guys have done an amazing job as well as the other young people that have been starting up business in Ventnor, like The Events Co. But I think it still has a way to go; I think there are varying reasons for this. One that I have been talking about today, is the number of holiday-makers with second homes. As much as we need tourism, I don’t think it’s productive having people who own homes that only live in them for four weeks of the year. It would be much better to have people living in these homes all year round. There is a ridiculous amount of these homes on the Island, and a considerable amount of them in Ventnor.

Yes, this has been brought up in conversation a lot over the last few years. Do you see this changing?

I hope so, I think that we have people that have been coming down, seeing the work everyone in Ventnor is doing and are decided to spend more time here. It’ll take time but I hope that this will happen with more people.

A big thank you to Jim and everybody that come in to have an interview with us this week. You can find the round-up of these interviews here.

If you’d like to listen to any of the interviews with artist and performers at the Fringe this week please visit our Mix Cloud here.

Are We There Yet?