Heady Conduct, hello! What a great name for a theatre company, it means Exhilarating Behaviour right? Hopefully you’ll be exhilarated by everything at the fringe this week! What three words would you use to describe your work and the show, Tiresius?

The show is inspired by the Greek Myth of Tiresius who was granted the gift of foresight by Zeus. Where did the interest in Greek mythology and this story come from?

Great question. It started with a module of Greek plays and storytelling at drama school; Tiresius appears in a number of Greek myths and stories, though never as a major player. We were intrigued by the amount of times he appears, and started to piece together his life; a blind prophet who walked with royalty and rejects, living both as a man and as a woman in his 600 years of life. He is called upon by some of the heavyweights in the ancient world; Hera, Zeus and Oedipus are a few. We were curious to explore what it is to be both blind and seeing, woman and man, prophet and beggar.

Multidisciplinary shows are amazingly popular at the moment, can you tell us a bit more about your use of live music and storytelling in the show?

For the larger part of Tiresius’ life, he is blind, and we wanted to create a world that was textually and audibly vivid, to create an experience which the audience can be enveloped by. Music has always been integral to Heady Conduct shows, and we have the privilege of working with the wonderfully imaginative and incredibly talented Rebekah Harvey on Tiresius. Rebekah has written a score which has become the backdrop to the ancient world Tiresius lives in and a second character in the piece. We like to make potent theatre that our audiences feel a part of, characters lives they can relate to or recognise and we embrace the ancient Greek tradition of storytelling. Simon plays a number of characters from Tiresius 600 year old life, and epic storytelling allows us to look at glimpses of his extraordinary story. 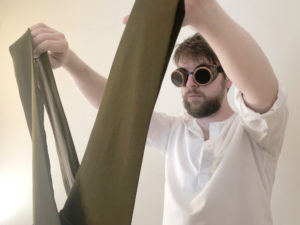 Tiresius can see into the future, and someone has said you are “on the path to a glorious future”. What does the future hold for you as a company? Where do you see yourselves in 5 years?

We’d like to see our show Tiresius tour, and long-term, we’d love Heady Conduct to travel and develop more relationships with wonderful festivals like Ventnor, as well as theatres in the UK and internationally. In the next 5 years we’d like to expand Heady Conduct and create career opportunities for others. Tiresius says in our production, “I could see my future laid out before me, all the adventures I would take…” and hopefully those will be the adventures we will embark on as a company!

Looking not so far into the future, but just ahead into Fringe week, is there anything you hoping to see during the festival?

People watching our show! And aside from that, some of the brilliant artists, companies and acts at the Ventnor Fringe this week. It’s Heady Conduct’s debut at Ventnor Fringe and we are excited to get involved and soak up the atmosphere. Some, but by no means all, of the pieces we have our eye on in the festival are Phlegm’s street art, StoneCrabs’ “Some Kind Of Love Story”, Flugelman’s “Boxman” and “Holy Matrimony”.

A Quick Chat With 5 Tales of Love and Madness