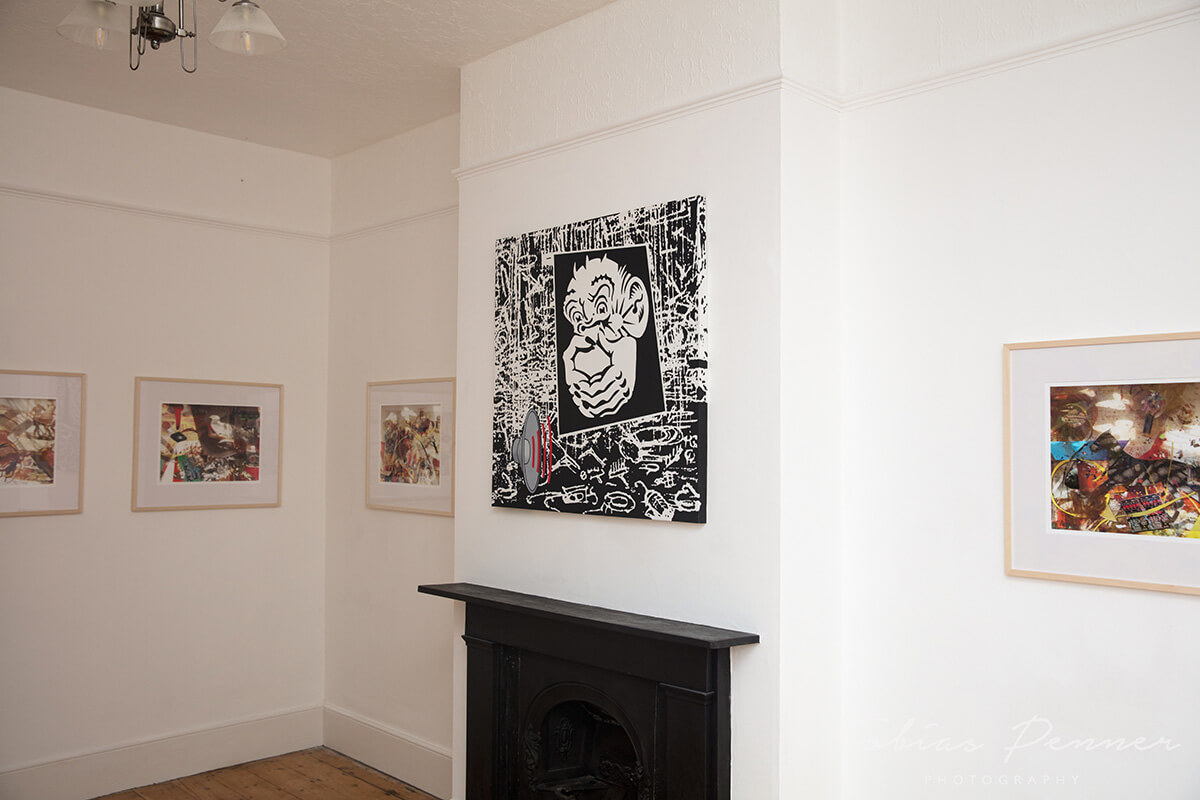 art_house_life: Electric Dreams –Adventures in the Unreal is a contemporary arts project based at 35 Medeira Road by two artists, Joanna Kori (Jo) and Albedo Marz (also known as David). Much of the gallery is adorned with huge canvas paintings and digital collages. We got a sneak peak of this stunning collection on the Monday night before Fringe kicked off…

So to get stuck in, by the front door is a bird created with Jo’s unique sculpting style, made with gum tape and linseed oil. This seemingly delicate bird sits by the light, showing the layers of tape with a smooth shiny finish, almost as though a seagull had sat patiently inside a mould for the piece.

Her previous exhibition at the Quay Arts in January featured a curtain adorned with artist tools. Jo tells me that the curtain concept came from the realisation that technology has overtaken so many art forms and how long would it be before these beautiful tools became outdated fossils in the art world. The installation also included floating artistic figures working with their hands, along with several perched and flying birds; brothers and sisters to our door-side companion.

“I’d seen this article last year while I was making the piece where it said within a generation or two our hands might not actually be capable of using these tools. That’s when I did lots of casts of artists hands in positions they might take to use the tools. So it was like a responsive piece.” – Joanna Kori

Jo has been working for over 20 years as an award-winning games and interactive learning designer alongside her long-term sculpture, installation, drawing and print projects. She has three installations in mind for her next project (to eventually be shown in 35, Madeira Road), that have developed on from this exhibition. Hopefully we’ll be seeing this pop-up at next years Fringe…

She is more than happy to talk to you about her work, but the exhibition in art_house_life is quite heavily centred around David’s collection.

David has been producing art over the last 60 years and spoke to me about his inspirations, and the process he went through to produce some of his pieces. Two large canvases (one in the kitchen and one on the staircase) caught my eye in the house, David went on to tell me more about the pieces.

“The paintings were really about the failure of the Islamic revolution really. I was somebody that was extremely impressed by the sheer size of the democratic voting for the Ayatollah Khomeini when he came to power. 97% of Iranian people voted for him and in 3 of 4 years that revolution was betrayed. Some of the dark themes that are in the centre of that painting represent the bodies, the effigies in Tehran and all the rest of it. In the Middle East, right from the time of the Mongols, the horse represents a whole source of power.” – Albedo Marz (David)

For those unfamiliar with Ayatollah Khomeini, he was an Iranian philosopher and revolutionary, who ultimately led the revolution to overthrow the Pahlavi monarchy in Iran. His ideals changed so much over the course of his reign as the country’s supreme leader, that his original principles were lost as was his huge public support eventually resulting in his exile.

Interesting fact: Khomeini was the man that put out a fatwa on Salman Rushdie.

These two paintings are like split screens, one half of each painting is very dark with strange, eerie-looking shapes peering through the darkness and the other half, bright and bold. A horse features in one of these and a few of David’s digital prints, symbolising the Arab influence to the image.

There is a lot of history in David’s work and social political struggle. Some of his newer pieces follow a different socio-political pathway, I noticed another painting, the first of his latest series called Shape Shifting.

“It brings together the traditional themes of painting, landscapes, objects, still life and figure painting but they’re all brought together as signs of a disintegrated environment. Most of my work is fragmented in one form or another and it’s part of how I see it, a disconnected world. I know everybody talks about it as a connected world but I see us as very disconnected.” – Albedo Marz (David).

David goes on to talk about how heavily reliant we are on media and technology in modern day. His latest inspiration draws from his idea of a disconnected world and how being so remarkably connected in this way will ultimately cause worldwide dysfunction.

It all comes back to the idea of being under surveillance, having every personal detail on show for the world to see and how this will ultimately affect society. Shape Shifting is a bright and energetic piece, I’m interested to see where the other seven in the series end up, from the sounds of it, they could get quite dark…

The exhibition is open all week so make sure you get down to 35 Madeira Road to see this distinctive collection before the end of the week.